Gavin Friday plays Dublin with The Radiators from Space

Gavin Friday will sing with The Radiators for their Dublin gig on July 6 in the Voodoo Lounge.

The Radiators' front man Philip Chevron is taking time out from touring. He was recently diagnosed with throat cancer.

The show will feature some Radiators classics, alongside songs from the new album Trouble Pilgrim.

The third (as yet untitled) album is in the can. After a marathon session on Saturday, Nick Robbins finished the final mix and returned to London to prepare for mastering.

The tracks for consideration are: Consierge, We Are So Beutiful, Trouble Pilgrim, Don't Walk Away, Joe Strummer, Heaven, Package From home, Second Avenue, Huguenot, She Says i'm A Loser, Hinterland, Tell Me Why, Wordsand The Dark At The Top Of The Stairs

The Album will be released under the name The Radiators from Space (Hurrah!)

We hope to shedule release around September 2006

The Radiators go back to Grouse Lodge on the 7th April to continue the recording of their new album. Eight more songs to record including Phil's ode to Joe Strummer. This session of will see the debut of the newly recruited bass player Jesse Booth. 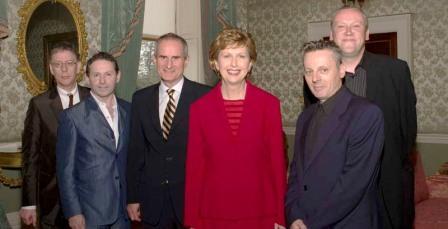 The Radiators meet The President

The President hosts a reception for entertainers from throughout Ireland 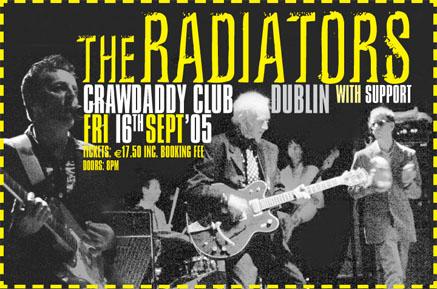 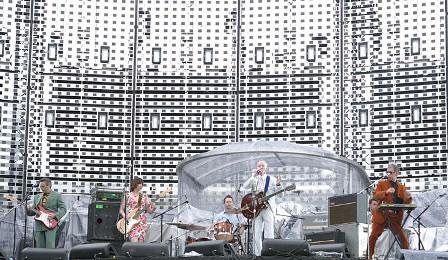 On stage at Croke Park as special guests on the U2  Elevation Tour Dublin show
Croke Park slot re-scheduled!

The Radiators  slot on the U2 Croke Park bill has been switched to ;